a monkey on one’s back
– a serious problem that stops someone from being successful at something
Seven games without scoring a goal was a monkey on the back of the famous soccer player.

in a pig`s eye
– unlikely, not so, never
Never in a pig`s eye will my friend be able to save enough money to go to Mexico for the winter.

buy a pig in a poke
– to buy something without seeing it or knowing anything about it
You can buy the used computer but it will be like buying a pig in a poke if you do not look at it first.

a cash cow
– a product or service that makes much money
Our new business is a cash cow. We are making much money now.

have a cow
– to become very angry and upset about something
Our teacher had a cow when nobody prepared for the class. 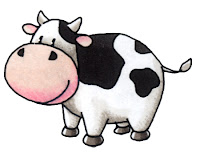 Holy cow
– used to express strong feelings of astonishment or pleasure or anger
“Holy cow,” the man said when he saw the car that hit the street lamp.

a sacred cow
– a person or thing that is never criticized or changed even if it should be (from a cow which is sacred in India)
The school lunch program is a sacred cow which they will never change.