A leap year (or intercalary or bissextile year) is a year containing one additional day in order to keep the calendar year synchronized with the astronomical or seasonal year. Because seasons and astronomical events do not repeat in a whole number of days, a calendar that had the same number of days in each year would, over time, drift with respect to the event it was supposed to track. By occasionally inserting (or intercalating) an additional day into the year, the drift can be corrected. A year that is not a leap year is called a common year.

For example, in the Gregorian calendar (a common solar calendar), February in a leap year has 29 days instead of the usual 28, so the year lasts 366 days instead of the usual 365.
In the Gregorian calendar, the current standard calendar in most of the world, most years that are evenly divisible by 4 are leap years. In each leap year, the month of February has 29 days instead of 28. Adding an extra day to the calendar every four years compensates for the fact that a period of 365 days is shorter than a solar year by almost 6 hours. 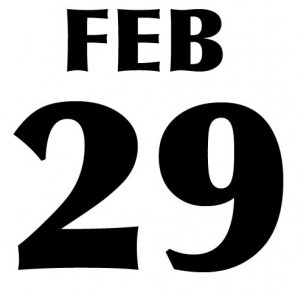 The marginal difference of 0.000125 days between the Gregorian calendar average year and the actual year means that, in 8,000 years, the calendar will be about one day behind where it is now. But in 8,000 years, the length of the vernal equinox year will have changed by an amount that cannot be accurately predicted. Therefore, the current Gregorian calendar suffices for practical purposes, and the correction suggested by John Herschel of making 4000 a non-leap year will probably not be necessary.
Previous Article Next Article