Monica’s Gang – A little about them…

Hello guys, some time ago, we put here in our blog some comics of “Monica´s Gang” (Turma da Mônica). But, one thing we didn’t say, but is a nice curiosity that just a few people know, is the name of our characters.
Since they started to translate the name, they’ve already changed, for example (Cebolinha and Cascão used to be Stanley and Scurfy). The most amazing this is that many names are really original and have everything to do with the characters. Let’s see the names of some of them.
P.S.: (A Turma da Mônica) is called “Monica´s Gang.
The Main Characters (Os Personagens Principais)
Mônica – Monica (They never forget.)
Short, fat and bucktoothed – (Gorducha, baixinha and dentuça, the three “titles” to Monica.)
Cebolinha – Jimmy Five (The name tries to “translate” the character’s hair.)
Cascão – Smudge
Magali – Maggy (Sooooo cute *-*)
Sansão – Samson (Kind of obvious.)
Franjinha – Franklin (This one was great, the character is as smart as Benjamin Franklin.)
Anjinho – Angel
Marina – Marina
Dudu – Junior (The boy that doesn’t want to eat.)
Quinzinho – Toddy
Do Contra – Nick Nope (With this name he could be a rockstar!)
Nimbus – Nimbus
Chico Bento – Chuck Billy
Rosinha – Rosie Lee
Penadinho – Bug-A-Booo (Always with three Os!)
Horácio – Horacio (Simple)
Muminho – Moe, the Mummy
Dona Morte – Lady McDeath (I loved this one.)
Maurício – Mauricio (Exactly! The Americans have the right to know who the guy that invented these characters is.)
Bidu – Blu (For a blue dog, I think the name is even better than it was in Portuguese.)
Floquinho – Fluff
Chovinista – Chauvy (PS: Chauvy is taking too long to grow up, don’t you think? Did you know that pigs grow up really fast? That’s why the movie “Babe” used more than 10 pigs!!!!)
Monicão – Ditto
Mingau – Vanilla / Popcorn 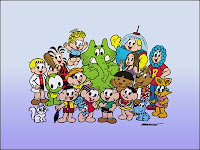